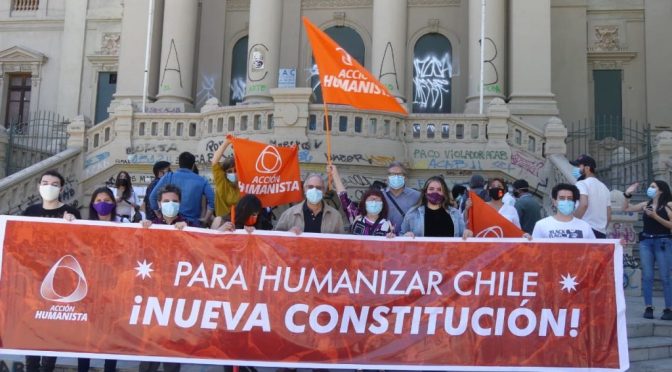 In our search for interesting, challenging and critical perspectives on contemporary humanism, we occasionally find articles published via other venues that we think HumanistFreedoms.com readers may enjoy. This week, we found news that Chile has a brand new, legal Humanist political party. While we aren’t experts in Chilean politics, we are aware that this development follows a difficult period in Chilean history – most recently demonstrated by constitutional challenges. Indeed, in a world that seems to face no shortage of political challenges, it is interesting to note that Humanist political parties exist in many countries around the world. Currently, there is no Humanist political party in Canada that we are aware of. Perhaps Chileans have recognized what we’ve not yet seen in Canada: there’s a deep and urgent need for reason in politics.

The following article was located on the Pressenza website on October 2, 2022.

Today the more than necessary signatures to legalise Acción Humanista as a political party in Chile were presented to the Electoral Service.

After two and a half years since some 300 militants left the Humanist Party and left that collectivity as a mere movement that did not seek to sustain the original organisation, this new movement is being legalised today.

They worked during the pandemic, they gave themselves their statutes, added adherents, launched their membership campaign and were raising a contagious energy with which they took to the streets while also sustaining their virtual activities. They developed that very special mix that was militancy in times of pandemic.

In this context and after the Chilean social awakening, they supported the “Apruebo” option in the Plebiscite, they sought to elect constituents by running candidates in several districts, and they still presented themselves as a movement in the municipal elections where they obtained the first favourable results that allowed them to elect their councillors. Subsequently, they supported the elections of Governors and CORES, and concluded with a very strong campaign both in the Primaries and for the parliamentary elections in which they won the re-election of Deputy Tomás Hirsch and the inclusion in their ranks of the recently elected Deputy Ana María Gazmuri. They campaigned for the second round of the elections where, with all the forces of Apruebo Dignidad, they achieved the massive vote that put Gabriel Boric Font in the Presidency of the country.

They then went on to form, albeit still as the Acción Humanista movement, the political team on which the new government is relying. Marilén Cabrera was nominated to the Undersecretary of National Assets, they obtained several Seremías in different regions and also a series of other public posts.

While they were trying to gather all the signatures that would allow them to become a legal political party, they worked day by day for the possibility of approving the new constitutional charter in the exit plebiscite and, together with 38% of the population, this time they failed miserably.

However, their work over the last two and a half years has been plagued by solidarity campaigns, forums, retreats, activities, meetings, gatherings and so on. There has been a strong press coverage, especially by Deputy Tomás Hirsch, but also by several others.

And today they have been legalised. With this, Humanism once again has a legal political party in Chile, and that is good news. Tremendous news. It is now called #AcciónHumanista and it carries the spirit that has characterised humanists since the 1980s.