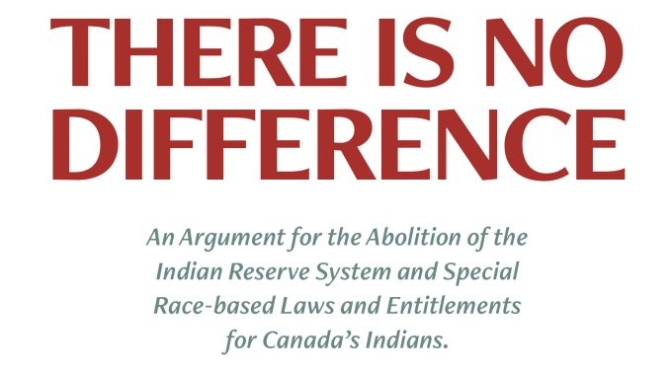 According to the back cover of his book and his website, Peter Best is “a lawyer who has practiced law in Sudbury, Ontario for 43 years. Raised in nearby Espanola, favored with lifelong personal and professional relationships with indigenous Canadians, he brings a personal, literary and historical perspective to the greatest social crisis experienced by Canada today- the perilous state of its original peoples.”

What is the book? The long-form version of the title probably acts as the best summary of its contents: There Is No Difference: An Argument for the Abolition of the Indian Reserve System and Special Race-based Laws and Entitlements for Canada’s Indians. In a regular book review, we might investigate the overt arguments and contents of the book. Certainly the title contains enough potential for drama and controversy to whet almost any intellectual appetite. But that’s not what we’re going to do here. What we’re going to do, instead is feature, an underlying theme presented by Mr. Best.

On page three, he writes that when he was growing up in Espanola, “there was a sense that old religious and ethnic prejudices were hollowing out and being overcome, and that increasing social unity and equality was happening.” It is the first of many hints (and outright declarations) of an underlying theme of humanism to be found in the book. This is what we will consider.

How many books are currently published with an overt declaration of humanism or humanist values? More specifically, how many books are written about contemporary issues wherein humanist-based positions are asserted, explained, referenced and documented? These aren’t questions with precise answers. These are startled observations of an avid reader. I haven’t seen humanism asserted and affirmed so clearly and frequently in a long time. Water for the thirsty.

On page seven, Best writes…”the humanist assumptions were ones that emanated from the confident, busy, properous people we were then. They seemed to be shared by everyone, right to the political and economic top of the country. They highlighted what a civilized, progressive, ‘ideals in action’ society Canada was becoming.“

The book is written as a series of essays which, across 700+ pages, delves the matter outlined in the title in pains-taking detail. Frequently Best grapples head-on with various ideologies and asserts arguments and positions contrary to those from Canadian intellectual and political “elites” (Best’s term). The book is thoroughly referenced and widely sourced. The overall theme is that “somewhere along the way, liberal, humanist aspirations once common to our entire country have ceded to various forms of petty and chauvinistic ideological tribalisms and, with respect to our Indian peoples, to actual racial tribalism.”

And then again, Best asserts that he believes “that the vast majority of Canadians profoundly disagree with this trend towards further legal and social racial apartness between Indian and non-Indian Canadians. They want our humanist values – with their emphasis on equality and the rights of the individual over the rights of any racial group – respected, maintained and promulgated in all areas of society….why this rejection of 200 years of enlightenment thinking?“

The point to be made is not that all of Best’s arguments represent a clear, consistent and authoritative humanist approach to the topic. It seems highly unlikely, not to mention undesirable, that a singular humanist outlook should be asserted on any substantive matter. Nor should this article be read as an endorsement of every argument Best makes. Instead, Best is here approved on the basis of making an attempt to present a considered humanist-principled perspective on a hot and fraught topic.

Best makes an argument about his chosen subject that may be stated about any number of contemporary issues: “this issue is being driven and dictated by…a minority elitist theory of democracy, where on an issue of this importance the majority is being asked for and being offered no say.“

Peter Best has asserted his version of a humanist-informed opinion. More humanists need to step forward to assert similarly cogent humanist perspectives on whatever contemporary issue seems to require the attention.